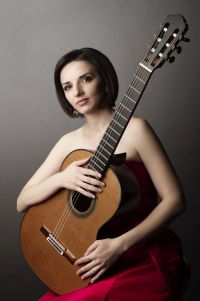 Miriam studied at the State Conservatory in Bratislava. After obtaining a bachelor degree in interpretation and pedagogy at the Academy of Performing Arts in Bratislava she studied with outstanding guitarist and pedagogue Alvaro Pierri at Université du Québec á Montréal and Université Laval in Quebec City where she obtained a master degree in interpretation (2001). In 2003 she completed her studies at Universität für Musik und darstellende Kunst in Vienna as a postgraduate student with the same teacher.
As an active participant of international master classes she cooperated with such artists as Abel Carlevaro, Alvaro Pierri, Luise Walker, Oscar Ghiglia, Pavel Steidl, John Duarte, Hubert Käppel, Costas Cotsiolis, Zoran Dukić, Aniello Desiderio and Laura Young.

Miriam participated in several guitar competitions in Slovakia as well as in Vienna (Austria), Kutná Hora (Czech Republic) and Weikersheim (Germany) where she won major prizes. Two times (1999, 2000) she was the winner of a scholarship as the best participant of the master class at the international music festival Joventuts Musicals de Torroella de Montgrí in Spain permitting her to perform recitals in Spain and France.

Miriam performed at such famous concert halls as Prague Rudolfinum, Berlin Konzerthaus, Seoul Art Center, Auditorium Conciliazione Rome, Teatro Filarmonico Verona and others. In addition to Slovakia she has played in almost whole Europe, in South and North America, Africa and Asia. As a chamber music player she performs regulary with some great Slovak, Czech and Hungarian artists.

She has recorded for the Slovak Radio, Praga Digitals label (France) and Pavlík Records (Slovakia). In 2005 she initiated and established the international music festival Bratislava Chamber Guitar of which she is the artistic director.

For several years she was engaged by the Universität für Musik und darstellende Kunst in Vienna. Now she teaches at the Conservatory in Bratislava. Miriam is playing the guitar by world-known luthier Gernot Wagner.